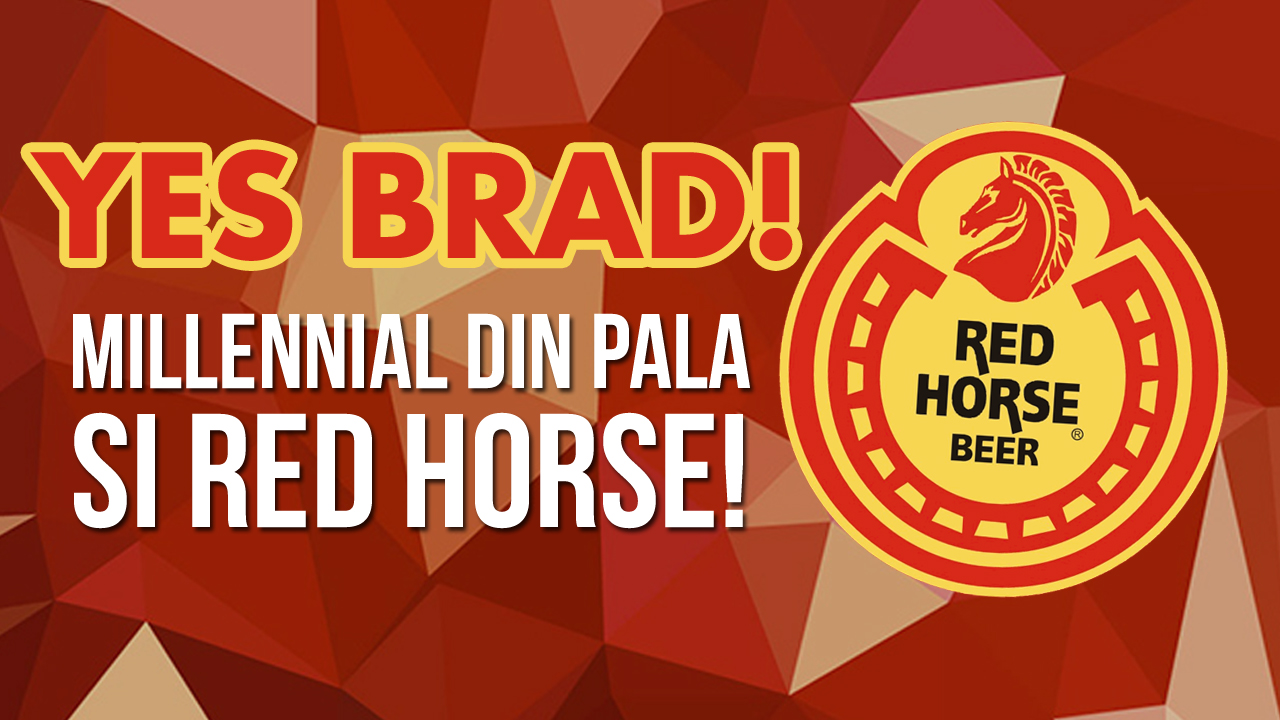 A tribute to Red Horse Extra Strong Beer on its birthyear.

Baka sa akala nyo, solid old school na si Red Horse, dyan ka sumablay, amigo. Red Horse Extra Strong Beer was introduced to the Filipino palate in 1982, meaning isa syang certified Generation Y (1981-1991), one of the wings of the Millennial group while the other wing is Generation Z (1991-2001). Batang bata pa ang favorite mong beer compared to its other brothers and sisters in the San Miguel Brewery Brand. It was a response to the entry of the Asia Brewery Inc into the beverage industry.  Di pa subok, palaban na ang manok mo, chong. Its main rival is Colt 45, but this new brewery on the block was no match against the ingrained history and loyalty of the Filipinos to their number one beer, San Miguel Pale Pilsen. It pays to have a popular Lil old bro, to pave the way for its success. Red Horse was introduced as the bigger (500ml) and stronger (6.9%ABV) beer only the extra ordinary men can handle its fueled kick. Available in four varieties: The Stallion (330ml), the regular (500ml), the Mucho (1liter) and soon enough 330ml can.

If SMB Pale Pilsen went after the Bidas of Philippine Cinema, Red Horse went for the contrabidas, the anti-heroes. Its first endorser was Ruel Bernal, that mountain of a man with his thick mustache. Red Horse also focused on the Rock N Roll music, concerts and band contests while SMB Pale Pilsen went to support sports like basketball, boxing and billiards.

During the Asian Financial Crisis, Red Horse launched their Rock and Roll Back the Price Campaign. Feeling the pinch of every Filipinos’ need to unwind and relax in such a tragic economy. They priced their 500ml at P11.50, the Mucho at P23 while the Stallion was just P8.00. Imagine having those prices now, walwal ka na mag-isa sa P100.00 mo. Saktong lagpas ka pa sa sagad.

One of the best thing about this beer is the urban legend surrounding its logo: The Happy Horse. When I was just starting to learn how to drink and felt indestructible, my friends and I would always look for that illusive Happy Horse logo. We thought it was very special, it kinda still is, but now we know that it’s because they recycle old bottles than make new ones that might affect the pricing of Red Horse. Magaling magdala, magaan pa sa bulsa!

Now on its 35th year, Red Horse is still the undisputed number one extra strong beer in the country. Accompanying the Filipino lifestyle in times of celebrations, heartache or just relaxing, may it be in your homes or in the sands during your vacations.

As a tribute to this kababata, I have been searching the internet for the appropriate beer signal that everyone could use to make that order of Red Horse fast and easy. What better way to find it by digging into its first television commercial, starring Ruel Bernal and Larry “Pipoy” Silva. You can see the beer signal gesture at mark 0:18 to 0:20 seconds of the TVC. We provided a boomerang loop below.

If you love Red Horse let’s use this beer signal and share it with all our family, relatives and friends. Educate our bartenders and waiters too, so they would know that this gesture means ice cold Red Horse Beer, ora mismo pwera preno. Dahil sa extra strong beer na ito, kasang-kasa sa panlasa, wala ka nang hahanapin pa. Kaya natin ‘to! Cheers!