PacMan can still knockout without throwing a punch… 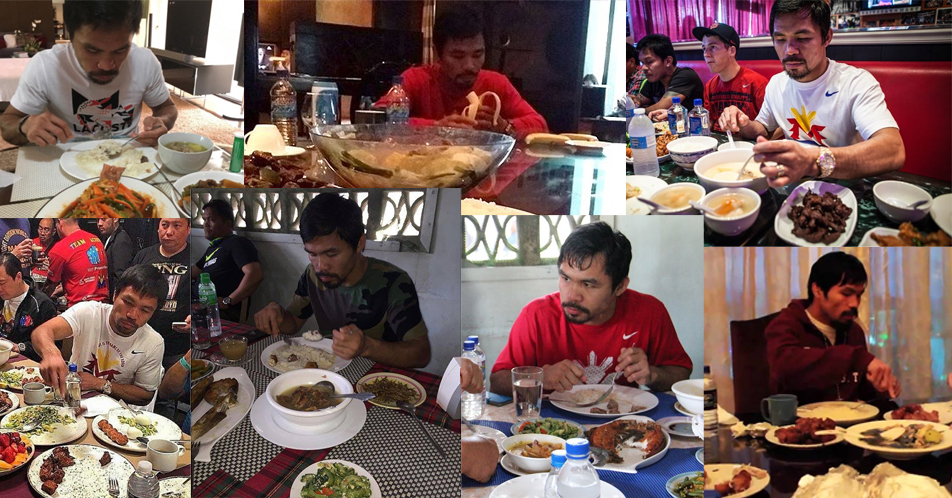 Let’s check out the tale of the tape for this match up. On the red corner  is Matt Stonie is a world class Major League Eating Champion and the youngest in the Competitive Eating roster. He set the world record for eating 10 pounds of pasta in 8 minutes in 2015. He also tried the Micheal Phelps diet of 12, 000 calories in 42 mintues and 15 seconds.

On the blue corner The Pacquiao diet, consisting of a full day’s meal of the Pambansang Kamao, Sen. Manny Pacquiao. It includes: Six Protein Shakes, Cantaloupe, Honey dew, Water Melon, and a Mango, 1/2 pound Tapa, 1/2 pound of Chicken Adobo, 1/2 of baked Tilapia, 1/2 baked Salmon, lots of Broccoli, lots of Asparagus, 2 bowls of 150gram oatmeal, 2 full glass of non-fat milk, a lil bit of honey, 1 bowl of berries, 2 bowls of beef broth, a ton of white rice, and 4 Butter Fingers Cups. All in all 7,350 calories or 19.3 pounds.

He almost gave up, barely finishing the meal in 55 mins. Having done the Micheal Phelps diet made him underestimate our Filipino Champion’s Diet. His friend was also disappointed. Watch near the end when he started giving out excuses. He is down for the count and staggers his stance as he closes the video. We give this fight to the Pacman’s Diet since Matt “The Megatoad” Stonie didn’t finish the whole thing! Mabuhay ang Pagkaing Filipino! Cheers!